One of my Faves - Tino/O'Neill dual relic 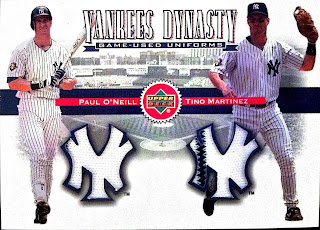 One of my favorite cards is my Tino Martinez/Paul O’Neill Upper Deck Yankees Dynasty dual jersey. The Tino has a sweet pinstripe, and the O’Neill actually has one just peeking out from the border. I hate when a stripe gets hidden. Happens all the time on Yankee relics.
O’Neill has been calling the last three series on the YES Network for the Yanks, so I’ve been listening to him a lot. He only does probably 20% of the games each season, if that – as the Yanks have an ever-revolving door of announcers….Kay, Singleton, Cone, Flaherty, Leiter, O’Neill, Bob Lorenz, Jack Curry. When he is not joking around, O’Neill brings up a lot of valid points about hitting and he’s got a good eye for what a player is doing right or wrong. The problem is that Michael Kay keeps egging him on to get laughs and for his own amusement. It’s odd to me, as O’Neill was such a serious and intense player, but in the booth is more on the goofy side.
Anyhow, this is one of my favorite cards of two of my favorite Yankees growing up. Upper Deck did a great job with the design– the interlocking NY cutout is a sweet border for the jersey swatches, the player photos jump well against the simple white background and navy blue stripe, and squeezing Yankee Stadium in between the two players was a nice touch.
Posted by The Lost Collector at 7:00 PM