Trade Review: This Card is Cool

A few weeks ago, I contacted Ryan G over at This Card Is Cool about setting up a possible trade. I figured I'd have a bunch of cards on Ryan's want lists, especially his Super Collection. I pulled a bunch of cards I had that I figured Ryan might need...and as it turns out, he didn't need many of them! That's a true testament to Ryan, who is is trying to collect a card of every set ever produced. No small task. The fact that he is 17% there is pretty amazing.

I did manage to find a handful of cards he needed, including a relic and an autographed card of Randy Velarde, which I had a spare from a past TTM success. Ryan sent me a 2008 A&G Melky Cabrera relic and a handful of other Yanks, including some 2011 Topps Attax and a sweet Munson National Chicle. 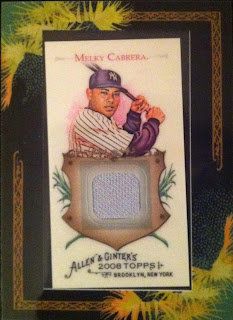 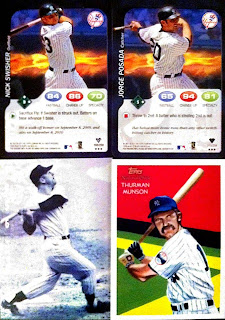 Thanks for the trade, Ryan!
Posted by The Lost Collector at 9:00 AM