Welcome to the show, David Adams! 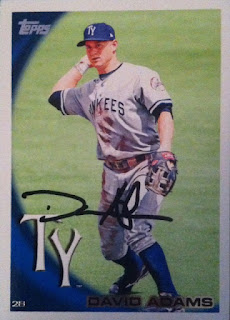 Seemingly every week, a new Yankee farmhand is making his major league debut. Mostly it's because 90% of the team is injured, but as someone who follows the farm system, it's exciting to see some of these guys get an opportunity.

Today, infielder David Adams will make his ML debut on his 26th birthday. Adams came up as a bat-first 2B and was on the fast track to the bigs before injuries derailed his career. In fact, his ankle injury is what prevented the M's from trading Cliff Lee to the Yankees.

Anyhow, with Youkilis on the DL, Adams is going to get the chance to play 3B every day. I'm excited to see what he does, and hope he can take advantage of this opportunity.
Posted by The Lost Collector at 4:42 PM