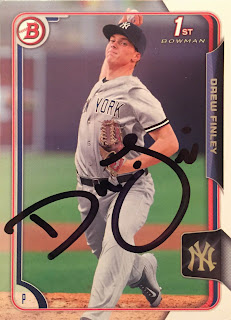 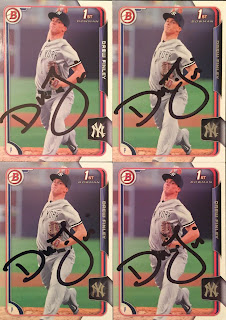 Yankees prospect Drew Finley signed all five cards I sent him in care of Staten Island. I will say that I actually did not expect (nor want) all five cards back. I had purchased a bulk lot of Finley cards, and I included a post-it note on the cards for him to keep a few for his friends and family.

Regardless, he chose to sign all five and return them, which I'll make sure to share with a few fellow collectors.

I'm a pretty firm believer in sending no more than three cards to a player, and usually not the same card. I know other collectors have different opinions, and that's fine, I just think it's a bad look when a large quantity is sent. When I send more than one, I always offer for the player to keep another. If there is one I really want signed, I only send that so there isn't a chance it will be selected over the other card(s).

Anyhow, Finley is a solid pitching prospect for the Yanks. He was their 3rd round pick in the 2015 Draft, and has had a pretty good start of the season for Staten Island, allowing no more than 2 ERs in any of his four starts. The Yanks gave him a well-above slot bonus to join them, as he looks to have a very bright future. He comes from a baseball family (I like bloodlines!), and his dad is a long-time scout now in a management position with the Dodgers.

I wonder if Finley might get an opportunity in Charleston later in the season. Regardless, innings are the most important thing for his development right now, so as long as he's healthy and throwing the ball, I'm happy.
Posted by The Lost Collector at 8:45 AM