I asked for this

When Tino Martinez showed up as a 2019 Bowman Buyback, I said it would be cool if he started popping up in Topps sets this year. While I have no proof, it does seem like he didn't have an active Topps contract, but that changed with him signing for the 30th anniversary of 1989 Bowman.

Well, I was right, as the Tino Martinez autographed card market has basically quadrupled in the last few months. Before then, there were only a handful of his signed cards. He was in early Topps Stadium Club Co-Signer sets. He had a few autographs in other Stadium Club products. He was most recently in some of Panini's Team USA sets.

Following the Bowman buyback, Tino was then in Allen & Ginter. While not an autograph subject, Ginter provides many parallels to chase.

As with any new product, the market starts high and begins to drop. While it wasn't easy to do, I waited out Tino's Topps Tribute autographs, and sure enough, prices dropped to be a lot more digestable. I picked up these to cards for far less than what they started off going for: 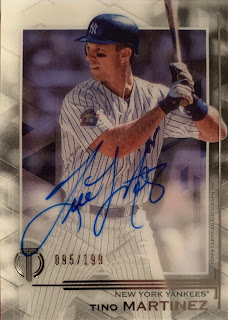 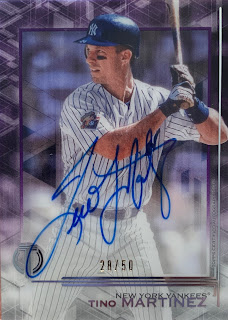 One is his standard silver autograph, and the second, a purple parallel.

And if you're counting at home, that puts me at 899 unique Tino cards. While last post I mentioned 898, I was already including the purple autograph above.

My guess is, we'll see more Tino this year. We've got Archives Retired Signature Series due out, as well as Triple Threads and Dynasty.
Posted by The Lost Collector at 8:54 AM