I don't have the blues. It's going to be a great and productive Saturday. It's supposed to be in the mid 60s today in NJ, which is pretty unheard of for mid-January. I should be snowblowing today, but nope! I'm going to rock some shorts and do things I need to do outside.

High up on that list is taking down the Christmas lights off of the house/bushes. Usually that's a task I hate because it's frigid, but not today. Perfect day for that. Plus, the Patriots-less NFL Playoffs are on.

Nope, no blues here. Instead, the only blues I have is a new card of Yankees prospect Clarke Schmidt. 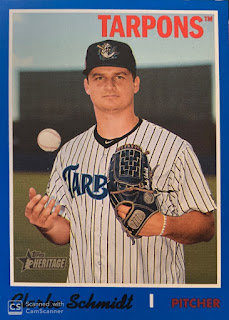 This parallel came from Heritage Minors.

Schmidt is pretty awesome. He out dueled Casey Mize last season on Opening Day, throwing five no-hit innings against him. By the end of 2019, he was dominating in the AA playoffs for Trenton. If things go according to plan, he should find a way to the Bronx in 2020. Although, things never go the way they are supposed to, especially for pitching prospects.

Still, he is talented, a bulldog, and is a very exciting prospect who is still flying under the radar.
Posted by The Lost Collector at 7:57 AM