I've got a token to ride

Tokens used to be a normal thing to ride NYC's mass transit subway system.
The first time I rode the subway was in 2002, and by that time the current-day MetroCards were already in existence. Today, MetroCards are still the main method of payment to ride, although many turnstiles now have an area where you can tap your credit card, phone, or even watch. Here is the MetroCard that currently sits in my wallet: 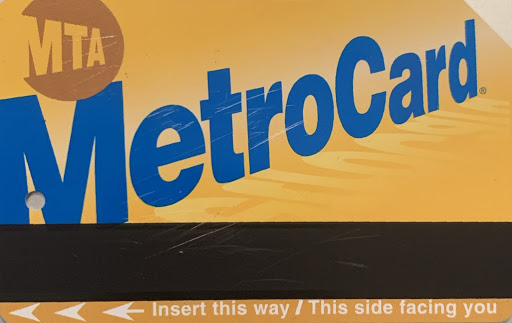 Still, for many years there was still a small slot to insert a token, even though no one had any.
What happened to all the tokens? Apparently Topps bought a portion of them, and placed them in commemorative 2000 World Series Subway Series relic cards.
The Subway Series set was actually a 100-card set issues to highlight the series. However, there was one token card per set. It took me years, but I finally tracked down the Tino Martinez: 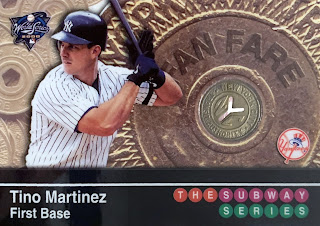 Very cool card! You actually cannot touch the token, as there is acetate on both side of the card. Tino is one of 36 players to be featured in the set.
I like the design very much, and think it was a unique relic set to add to the boxed sets. The back gives a little bit of a history on the subway token itself, as well as mentions these were an original token obtained for the NYC Transit Authority. 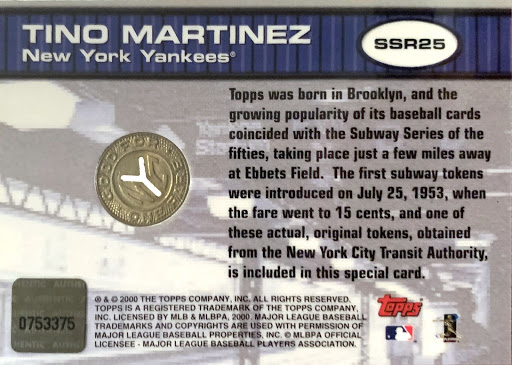 If we saw this in 2021, the back would likely read: Token is not from any specific rider, train, or subway station.
Posted by The Lost Collector at 8:07 AM