I don't pay close enough attention to Topps' website to know what's coming out and what's all the rage.

I do know from Twitter that it was hard to get these packs. Like trying to get concert tickets. Log on too late, and you're out of the luck.

The big draw in this set is Yankees top prospect Jasson Dominguez, the 17-year-old from the Dominican Republic. Dubbed as one of the next big things, The Martian has taken the prospecting world my storm. It's definitely early. Too early? The tools are there, but a lot can happen between now and whenever - if ever - he finds himself on the doorstep of NY.

One guy already on that doorstep is top pitching prospect Clarke Schmidt, the Yankees 2017 1st Rounder, selected 16th overall. They selected Schmidt right after he had had TJ surgery, knowing patience with him was going to be key.

It's paid off, as his 2019 season was largely a success. His 2020 spring training showed massive glimpses of promise, and put Schmidt firmly on track for a 2020 debut in the Yankees rotation. If that happens now, who knows? 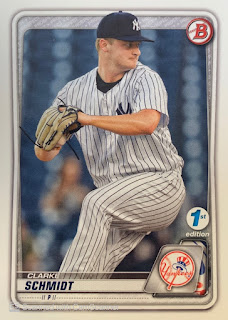 So while the world was focused on Dominguez, I decided to snag the Schmidt for a buck. And for good measure, I got the yellow for a few bucks more, numbered to 75 copies. 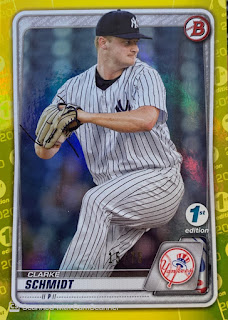 It'd be cool to have a Dominguez card, but that can wait. For now I'd rather focus on the guy who is right there, not 4 years away.
Posted by The Lost Collector at 8:34 AM