Orange you glad you use TCDB?

The TCDB trades have been rolling in, as many other forms of trading and acquiring new cards dry up. I don't post all of my swaps here, but one of my recents was a fun one.
I rarely add or peruse the basketball section of the site, but from time to time I do add a few cards of Syracuse Orange basketball cards just to keep my want a bit diverse. Luckily, it worked out in my favor for a trade with jrad1973, as I sent him a few Astros for the following cards.
While I absolutely hate baseball mascot cards (looking at you, Opening Day), I thought a card of Otto the Orange was cool to have. Typically Syracuse has four students play Otto each year, and during football they alternate each quarter. One of the best mascots in college sports! 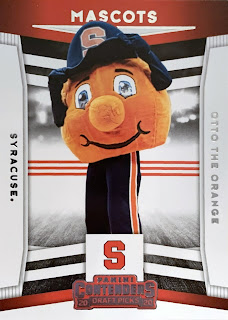 A couple of Syracuse one-and-dones! The Carmelo is cool, especially with Verne Lundquist and Bill Raftery in the back. Feels like a big event game! 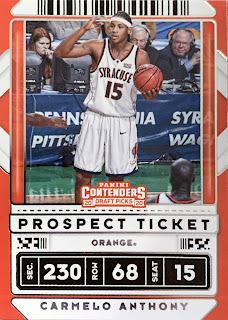 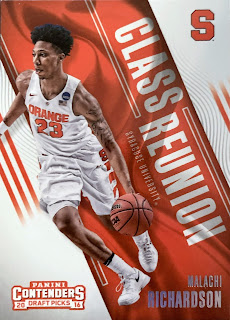 It wasn't just Syracuse cards! Three Yankees were included in the package, as well. I don't hate Contenders baseball. I have no idea when or they were released. Retail blasters, I guess? But I would have never come across them if not for TCDB.

Pretty cool what resorting to TCDB can net you, especially for unwanted Astros cards!
Posted by The Lost Collector at 9:16 AM