As the days of this blog wind down (more to come on that), I've still got a few things to show off here and there.
Overall, I think Topps Project 70 is utterly exhausting. Sooz did a good job getting a pulse on these on recent CardChat, and between acts of plagiarism to Topps shutting it down for a few days with little communication, the project was overly ambitious and is now tired.
Therefore, I fully expect a Project 2022 of some sort. This is Topps we're talking about.
The Project 70 checklist has been overloaded with Yankees, Dodgers, Trout, Ohtani. Once in a while a random player is featured, but for the most part it hasn't been as expansive as initially hoped. I thought I might even get a Tino at some point, but it doesn't look like that's going to happen.
And while I appreciate the freedom the artists have to connect their designs to a certain year of Topps cards, many times it's hard to tell and even Topps' website doesn't list the year of correlation.
I've only bought two so far. I did acquire an early Dock Ellis, and recently, my second arrived: 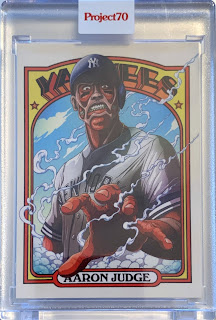 I do think Alex Pardee has been the star of Topps Project 70. His monster/alien/creature mashups have been a fun change and a lot more creative than some of the other photoshop filter efforts. While they may not be for everyone, after seeing his early Ronald Acuna, I always said that I'd buy any Yankee he decided to contribute.
Obviously, he chose Aaron Judge. The 1972 Topps design remains mainly unchanged, but we've got Judge exhibiting some cool monster-like features. I love the massive Judgian hand come at you. And apparently he's in some sort of bubble bath?
His face looks like it's got a few layers of skin overlapping one another, and he has about a hundred teeth showing. Terrifying, indeed. Pitchers, beware.
My only real regret is not buying this from Topps and even giving myself a chance at a foil parallel. I bought this during en eBay pre-sale to save a few bucks.
Cool card, tired project. That's probably the last one I'll buy...unless we get a Tino somewhere.
Posted by The Lost Collector at 7:00 PM