A TTM success trickles in

For the most part, I have stopped sending out TTM requests. While I enjoyed this aspect for the hobby for many years, I no longer feel the same about it like I once did for a multitude of reasons.
However, I have hundreds of unanswered TTM requests still out in the world, and every so often one finds its way back.
The most recent was sent in February, 2020, a few weeks before the pandemic changed the landscape of the 2020 baseball season. I was already sending out fewer TTM requests due to absolutely dwindling response rates over the past few years, but that didn't stop me from sending a handful to spring training just to give it a whirl.
Twenty two months later, former Yankee and most currently Red Sox Adam Ottavino returned two cards signed. Back when he was a Rockie, Adam used to sign with purple sharpie. It looks like he has traded that in for a more traditional blue marker. 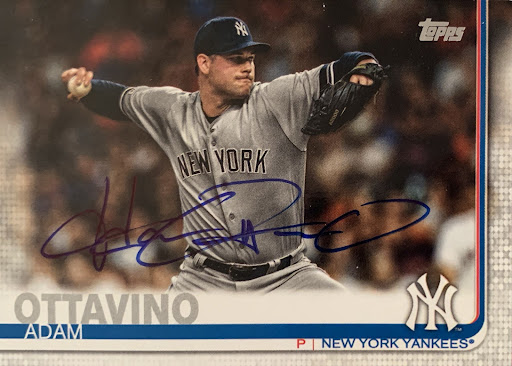 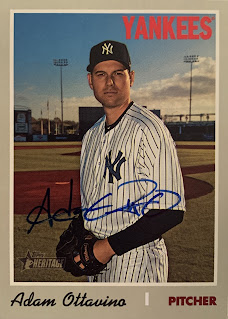 Both came out great. The Heritage is fairly cool.
Ottavino was sent to the Red Sox for virtually nothing so that the Yankees had some wiggle room under their self-imposed fake salary cap. For the most part, he was a dependable arm for Boston. He appeared in 69 games, throwing 62 innings and striking out 71, and saving 11 games. I didn't agree that the Yanks should send a veteran reliever to their rival, but what do I know?
I'm sure another TTM or two will pop up in my mailbox at some point, but for now, it's always fun when a surprise return comes back.
Posted by The Lost Collector at 7:56 AM