Alright! I'm on the board for 2016 with my first TTM success, former Yankees pitcher Shawn Chacon.

Chacon pitched for the Yankees in 2005 and 2006, although he's probably best known for his time with the Rockies. He was acquired mid-season in '05, and went 7-3 with a sub-3 ERA to help lead the Yanks to the post-season. Along with Aaron Small, Chacon really helped save the Yankees season and provide rotation stability. It was a small acquisition that proved very important.

I loved watching him compete. I just felt like he was fearless on the mound. I really became a big fan of his that summer.

He was nice enough to sign these cards for me in about 4 weeks. 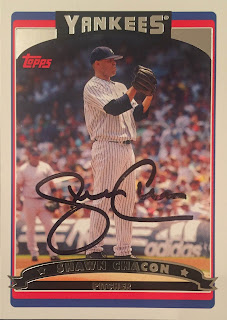 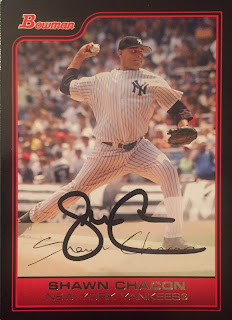 Now, here's the big decision. I'm thinking of using the 2006 Topps in my Topps Yankees Project. Currently, I have Kevin Thompson in there, and he's the only card in the complete project that is a "Traded" version. It has irrationally bugged me. Chacon is a true base card. Do I dare make the swap? 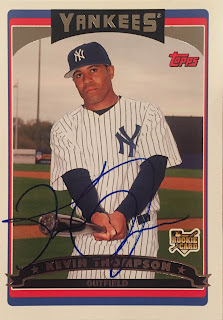 Posted by The Lost Collector at 6:00 PM