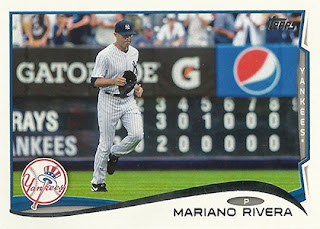 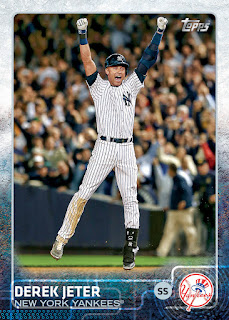 But there was no iconic card for me in 2016. I'm not man enough to pick a card featuring a player from another team, so I set my sight on only Yankee cards, yet no card jumped out.

The Yankees had waved the white flag and traded away Andrew Miller, Aroldis Chapman, and Carlos Beltran. They called up Gary Sanchez, followed by Tyler Austin and Aaron Judge.

Austin and Judge found themselves hitting 7th and 8th, respectively, in their Major League debuts. In the bottom of the second, Austin lined a 2-2 pitch from Matt Andriese just inside the right field pole for a homer in his first Big League at bat.

While Austin was still hugging teammates, Aaron Judge blasted a homer off of the restaurant windows in dead center. Back-to-back HRs, first MLB hits, in their MLB debuts. It gets no cooler than that.
So while this may not be these greatest looking card, it's my favorite memory from the 2016 Yankees, and it's cool to have a piece of cardboard that celebrates the feat. 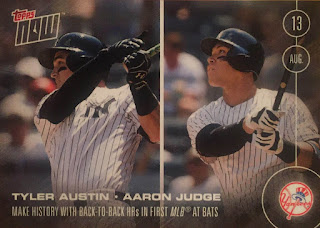 Posted by The Lost Collector at 8:43 PM