Many of us are familiar with the red paperclip story, but if not, check it out HERE. Essentially, a dude turned a red paperclip into a house through a series of trades.

Matt of Diamond Jesters is doing the same type of thing after offering up the contents of a pack of 2018 Topps Series One. I did this a little bit back in 2011 with the Topps Diamond Giveaway site. I tried taking a card I won and trading it for a card from the year before and so on. I think I successfully turned a common from the 1980s into one from the 1960s, but I don't remember at this point.

Anyhow, Matt has turned the single pack into 20 cards so far, with the oldest being a 1954 Bowman Jim Wilson.

In his latest swap, Matt got a few old basketball cards back. While I don't really collect basketball these days, I did a lot growing up. And I never once had a Kareem Abdul-Jabbar card. 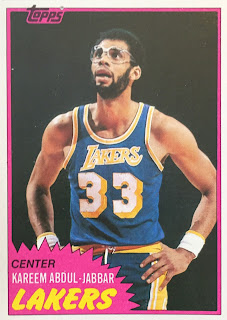 So when I saw one from 1981-82 Topps, I thought it would be cool to have and place within my son's HOF binder.

In return, I sent Matt nine cards - a few newer and then some from the 1970s, hoping he can turn those into older or more attractive trade bait in his quest for the oldest card he can find.

Matt, it's been fun to watch. Keep it up!
Posted by The Lost Collector at 8:24 AM