In the mood for some lasagna

Johnny Lasagna, aka Jonathan Loaisiga, is a young Yankees pitcher with a pretty badass name. He's also got a pretty badass arm. Scouts have longed raved about his talent. His real problem is actually staying healthy, as he's been plagued a few times with various arm injuries.

It'll be interesting to see if the Yankees new pitching and training staffs can keep him on mound, and can help him consistently tap into his talent. He might be better suited for the bullpen in the long term to help keep him healthy. Plus with Dellin Betances moving on, there's an opportunity for him to stake a more prominent role in the pen, should the Yankees go that way.

Time will tell, but it's easy to overlook him when looking at the stable of Yankees arms.

When he first came up, his autographs were hard to find and not overly plentiful. There's still not a ton out there, but he's been part of Topps Chrome and Bowman, so they are a bit easier to find. And it also means unlicensed ones like this are a lot easier to snag for a minimum bid: 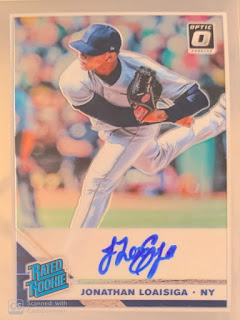 I wasn't hellbent on a signed card of his, but this was hard to pass up for the price. Hopefully he takes the leap this year and I end up looking like a genius.

Posted by The Lost Collector at 10:31 AM