There is only one Pancake King

Last week, Wes aka JBF aka The Pancake King dropped a line on Twitter to 13 of us, telling us we were the Lucky 13 and that he had a little something coming out way.

When Wes says something like that, it's not to be taken lightly.

We've all witnessed his generosity, and while he doesn't currently blog, he's always there like a snake in the weeds...just waiting to strike. And he struck just in time for the holidays.

I've always been very appreciative to be on Wes' good list, and his bombs have always been epic. What I appreciate most though, is the thoughtfulness behind it. He truly goes out of his way to send packages he knows the other person will enjoy.

When my Lucky 13 package arrived, part of me wanted to wait until Christmas to open it. But how could I look at a mailer from Wes for two weeks without peeking? Impossible. Plus, it arrived as I was outside hanging Christmas lights in frigid temps, so I felt in the holiday spirit.

So I opened it. 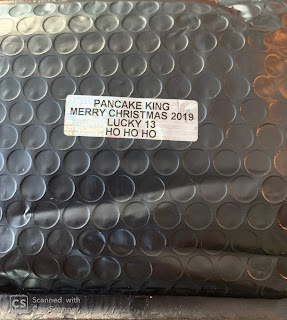 I love the tamper seal. Such a Wes touch. 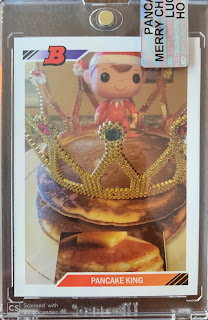 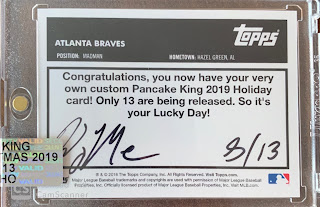 The first card was the Pancake King Bowman custom he was including in each package. Mine was #8/13.

And the gift itself was one card, but a big one: 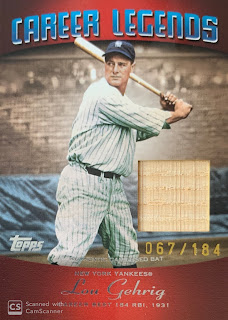 I never figured I'd own something like a Lou Gehrig relic, yet here is this card, now sitting in my collection. Unreal! I've become a bit jaded by all the great cards sent to me over the last 8 years of blogging, but this is one of those ones that stops you in your tracks. I keep going back to look at it.

What an incredible gesture, and a card I'll have forever. Even when I eventually downsize my collection, this one will stay.

Thanks, Wes!
Posted by The Lost Collector at 8:38 AM