Over the past couple of weeks, I feel like my mailbox has been extra busy. Between a few TCDB trades, blogger packages, and small eBay purchases, it's infrequent that a day goes by without something for me in the mailbox.

While fun, it does force me to do one thing I don't like! Sort cards!

But that's ok. The alternative is no cards.

Here's what a typical day at the mailbox looked like just the other day.

The first was a PWE from Bo of Baseball Cards Come To Life. He gave me a heads up this was on its way, and it was six cards for my son's HOF binder that I keep for him. While I am a slacker at actually updating that page on my blog, I do take everything that is sent for him and put it into his binder. I'll provide an update one of these days. 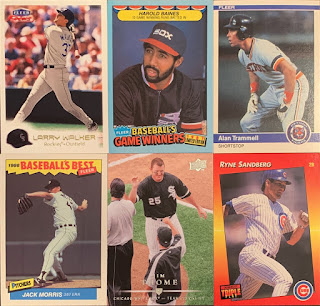 Thanks, Bo! Some good stuff here and a nice range of cardboard from some of the more recent HOF inductees. Baines even looks like he's in disbelief that he was voted into the HOF.

The next envelope was an eBay purchase from One Million Cubs. He always has free PWE shipping, and one day tweeted he had a few new cards listed. So I checked out his page and found a card I liked at a good price. 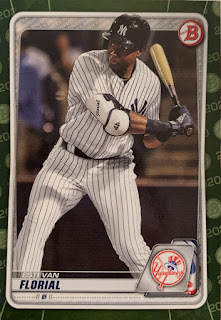 I like the camo parallels from 2020 Bowman. This was kind of a make or break year for Florial as a prospect, but I still hold out a touch of hope he can put it together.

Speaking of prospects, I snagged this autograph for under 2 bucks including shipping from a different seller. The Yankees got Josh Stowers from the Mariners via the Reds in the Sonny Gray trade. I was confused as to why the Yanks just didn't keep Shed Long (who was sent to the M's in the trade), but they don't have many decent OF prospects, so I guess it was more important for them to try and fill that gap than with another middle infielder. I don't know, I wasn't really feeling that. 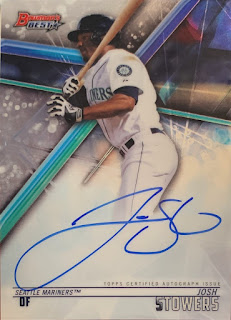 Stowers spent the year at low A and hit .273 with a good .386 OBP and 35 steals. We'll see if he can become a useful piece at some point. He was a second rounder in 2018 and last year was his first full year in pro ball, so he's got some time.

Three envelopes, all with a little something different. While it's still weird working from home, I do like being the one to grab the mail every day.
Posted by The Lost Collector at 10:06 AM