It's really a stupid thing. I'm a Bengals fan.

I was born into it. I have no Cincinnati ties. Never even been there. I hear Skyline Chili is actually quite gross.

But my Dad knew someone whose son was drafted by the team, and that coincided with the team actually being good in the 1980s, twice going to and losing the Super Bowl. So fans were born.

By the time I was old enough to pay attention to the NFL, the Bengals were perennial losers and an overall joke of a franchise. So while my friends in update NY all latched onto the Giants and Jets (no one cared about the Bills despite 4 SB appearances), I was stuck rooting for a constant loser. Not only a loser, but often a joke of a franchise.

I've seen this before, but I hope this time is different. There's reason for hope. Because the Bengals just drafted perhaps the best QB prospect to come out of college in the last 10 years.

Joe Burrow is from Ohio. He was supposed to lead Ohio State, but ended up at LSU after transferring. The rest is history, as he put top the most prolific season a college QB has ever had.

He's now a Bengal, and the fanbase has high expectations that this time is different. That this time, we have someone who can lead the franchise into and beyond the first round of the Playoffs. While I don't college football, I did snag his Panini Instant draft night card. 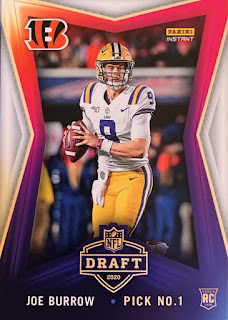 Time will tell. And there will be some growing pains this season. But for once, I have hope.