Two days ago, my blog's 10th anniversary came and went without a whimper. That was my fault. I had February 17th engrained in my head, but when I went to double-check yesterday, I realized I had actually missed it by a day. February 10, 2011 was the day.
I didn't have anything grand scheduled even if I did get the day right. To tell you the truth, it makes my slightly uncomfortable to think about doing this for 10 years. It's a bit of a secret part of my life that I don't really let people I know in real life in on. I also don't take it particularly seriously. This could be my last post and I'd be fine.
With that being said, I don't want to minimize how much I've enjoyed collecting and sharing my collection with others over the last decade. My collection has grown so much and in such cool and unexpected ways. So has the hobby, and I've grown and adapted with it.
I often do still feel "lost," so I think my name still fits. Things come and go that inspire me, and rather frequently. Perhaps it's picking up 1990s NBA rookie cards one month, and then I move on from that and pick up the Yankees latest three draft picks. Thanks for that one, ZZ.

Or it's big bubble mailers to and from bloggers for years, and then eventually two-card PWEs from Trading Card Database. 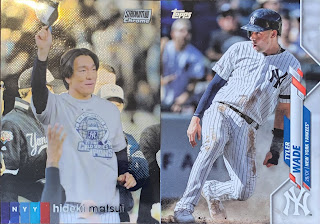 One consistent is Tino Martinez, and here are the two latest from him, bringing me to 1,058. 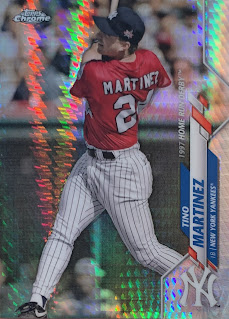 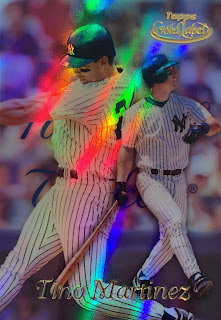 Regardless, thank you so much for following along! I don't anticipate a "here's to the next 10," but let's go with "here's to keeping going as long as I am still enjoying it." That feels better.
Posted by The Lost Collector at 8:30 AM