One benefit to the shortened season last year is that it made for quite a large rookie class in 2021 Topps, something I'm sure Topps was thrilled to see.
While there isn't quite a Luis Robert to chase down as of now, guys like Jo Adell, Alec Bohm, Christian Pache, and Casey Mize lead a strong Series One rookie class. One the Yankees side, we got Deivi Garcia and Albert Abreu. 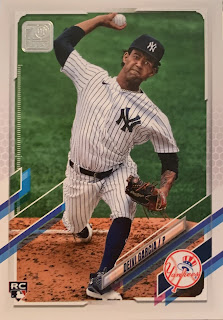 However, the player I wanted most will have to wait until Series Two, I assume, as Clarke Schmidt was not yet included.
Schmidt is the Yankees #1 or #2 pitching prospect based on which list you follow. He got a taste of the Bigs last year, appearing in three games. And like any top Yankees prospect, we have already received word that he is experiencing some elbow trouble already in camp and has been shut down.
Super.
While Schmidt did not receive his flagship RC, he did receive a card with the RC logo on it. He was included as an autograph subject in the 70 Years of Baseball set. I recently won this card on eBay, as it was a bit underpriced compared to comps: 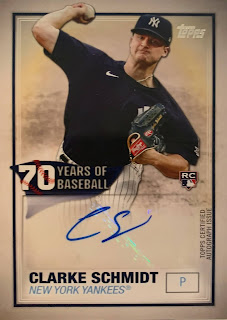 Not the ugliest insert design in 2021 Topps, although hard to imagine a guy with 6.1 innings of Major League Ball to his resume as a subject in a 70 years of baseball set.
Regardless, it's a nice addition to my Schmidt collection. I currently sit #1 on his TCDB collection list with a whopping 29 cards, although I have quite a few more that I have not formally added to the site. That number is probably actually in the 50-60 range, if I had to guess.
Interestingly enough, he did have what is a 2020 card that shows him pitching in an actual game in an empty Major League Stadium: 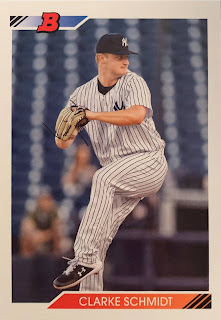 Kind of crazy that's not his RC, right? But I guess that's not the rule.
Posted by The Lost Collector at 8:08 AM