Floyd Little on the day of the Super Bowl 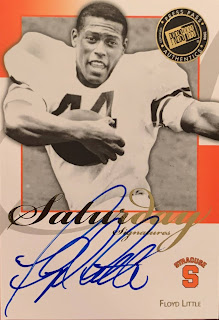 Just before Christmas, I showed off my Floyd Little rookie card. I'm glad I picked it up when he did, as he passed away after a battle with cancer on January 1. Yes, 2021 had already started by taking a legend. 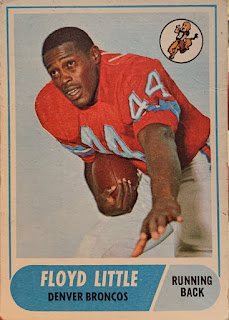 Despite being a Hall of Famer, Little's name doesn't come up often in conversation. While he played for the Broncos his entire career, many football fans have never heard of him. As a Syracuse fan growing up, and later as a graduate of the university, Floyd Little's name is branded in your head once you step foot on campus, or "the Hill" as it's referred to in Syracuse.
Jim Brown. Ernie David. Floyd Little. All three wore #44, which is a number that sits in Syracuse lore.
However, the University has totally botched using the number since the late 1990s, really. Thoughout the 70s and 80s, the number was used as a recruiting tool. Be the next great to wear 44 at Syracuse, they said.
And at Syracuse itself, students are expected to love the number. It's not just for sports. The school zip code ends in 44. The campus phone numbers begin with 442 or 443. It's highlighted on the football field and hangs from above the Carrier Dome. It's weaved in and out of lesson plans, on free t-shirts, and in campus promotions.
But then school made the stupid decision to retire the number for football. It's hardly the reason the program has toiled as a bottom feeder since the mid 2000s, but it was one of many head-scratching decisions to honor the hallowed number's past instead of making it part of the present and future.
Regardless, because of this, it's hard to spend time on campus and not know about, and eventually appreciate, Floyd Little. And he was always around. He went to games and worked for the program. He was full of charisma and represented the school well. It's just a shame more people didn't grasp what an incredible player he was:
Toward the end of his life, I decided to pick up a bunch of his cards, not because I knew people would price gouge once he did pass, but because I felt like I should have a few pieces of cardboard to honor a great. I know quite little about vintage football designs, so it was fun to come across those. 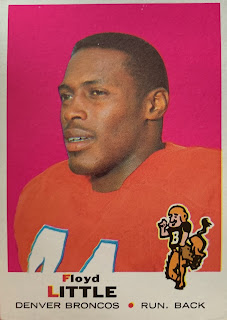 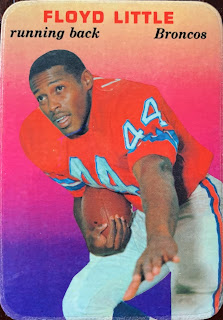 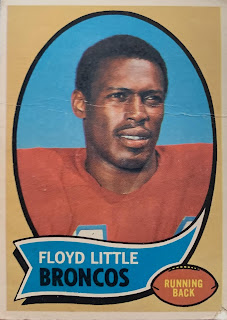 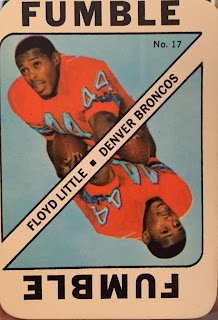 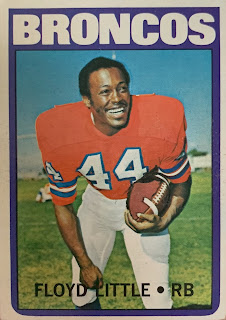 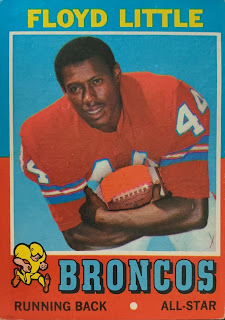 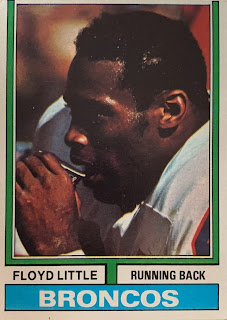 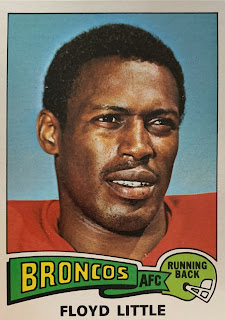 Most of these were picked up for a buck or two, although the autograph set me back a small amount, but  I wanted that one since he was seen in his Syracuse 44.
RIP Floyd. Enjoy watching this year's game from above.
Posted by The Lost Collector at 10:01 AM