Over the past year, I've cooled a bit on seeking out prospect cards.
I've always enjoyed following the Yankees minor leagues, but with so few prospects panning out, I'm often left with cards of guys who never made it or were dealt to other teams. While I don't collect these guys with the hopes of striking it rich, it does seem to take up unnecessary space in my collection.
Still, there are a few exciting young prospects in the Yankees system who do seem poised to actually do something other than serve as trade bait. Outside of Aaron Judge, the last decade run of Yankees first rounders has been awfully bad. Still, there are a few right now who are pretty exciting, including bat-first 2020 first rounder Austin Wells.
After a very good 2021 and then a solid Arizona Fall League, his cards got a little noticed. Not Anthony Volpe levels, but still a little more than they had. I decided to see what current stuff he has out there, and saw a Bowman parallel I hasn't seen before: 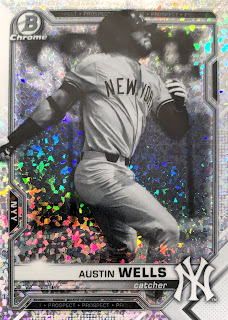 Pretty neat looking card, and I got it for a low price. While Bowman Chrome has approximately 400 parallels, "black and white mini diamond" refractors were new to me. Perhaps they have existed before, I don't know. The card looks pretty striking with the player's photo in black and white, surrounded by colorful mini diamonds. It's not rare or numbered, but I found it to be an attractive card and to me, that counts for something.
In the same lot I also got the standard "mojo" refractor. 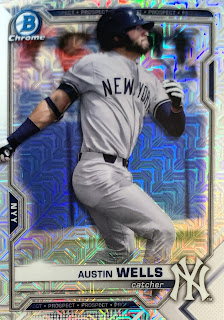 I hope Austin Wells turns out to be a good player for the Yankees. But even if not, I won't be left holding the bag.
Posted by The Lost Collector at 9:08 AM