Boyd, another win would be nice

I feel guilty wanting another Bengals Playoff win today.
It was awesome to see the team finally get over the hump and win last week's Wild Card game. As a Bengals fan, I should be happy enough with that. But that was six days ago and well, let's go win another one today.
The Bengals head to Nashville to play the AFC's top-seeded Titans. It'll be a tough game, especially with Derrick Henry set to return. I'd feel a lot more positive if he wasn't playing. But still, I'd rather the Bengals play them than the Chiefs or Bills...at least this week.
One main reason the Bengals won last week was because of veteran WR Tyler Boyd. One of the few holdovers from the Marvin Lewis era, Boyd is extremely dependable. He caught a TD pass in last wake's game...you know, the one on that embarrassing inadvertent whistle. My homer goggles tell me it didn't make a difference and the ball was behind the WR and just about into his hands anyways, but I hated how controversial that became. Let me enjoy the win, controversy-free.
Some games Boyd is targeted heavily, while others he is pretty quiet. It all depends on the game script, but I love seeing a guy like him finally get the chance on this stage. I have a few Boyd cards, but I really like these two: 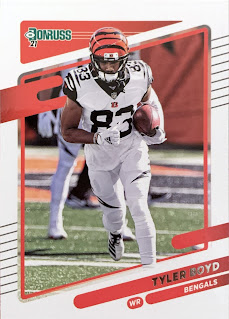 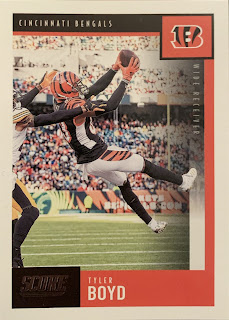 The 2021 Donruss is cool because I believe he is in his color rush uniform. It's a similar look to what the Bengals will roll out today, wearing all whites.
Another guy who is unheralded but an important part of the offense is TE CJ Uzomah. He's generally a 3-4 catch a game guy, but always seems to come through with a big play. It's obvious Joe Burrow greatly trusts him, especially in the red zone. 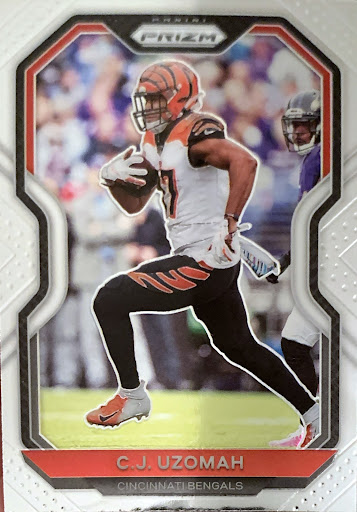 Can the Bengals advance to the AFC Championship today? I really hope so.
Posted by The Lost Collector at 8:16 AM

Email ThisBlogThis!Share to TwitterShare to FacebookShare to Pinterest
Labels: Bengals