Look how far we haven't come

Last night, Sooz ran a #chadchat about '90s inserts. It was great to see the engagement and excitement, as many, including myself, find the '90s to be the greatest era of baseball cards.
They aren't for everyone, and that's fine. Enjoy your own opinion. You won't change mine.
But for me, give me a beautiful shiny card with a fun theme and some asymmetrical features any day over a vintage card of a guy at spring training in a fake pitching pose rocking a porn 'stache.
The most common answer to "what made '90s inserts the best ever?" had a fairly common theme: creativity and innovation. While some don't feel innovation is needed at all in baseball cards, I find it staggering at the lack of progress over the last 30 years.
Think about cards from the late '60s to '90s, then think about the same time period from the '90s to the 2020s. We have stalled in our tracks, or in some cases, we've gone backwards.
I attribute much of this to Topps and their lack of competition. With a few exceptions, inserts were never their thing. And now, they can save money by printing inserts on the same cardstock as base cards. They can give the illusion of shine without having to actual give the card shine. Mostly, they are lazy.
They'd rather have 150 card insert sets spread across three series than they would a 10-card Hot Gloves set.
They'd rather just give us another 1987 homage or 70 card reprint sets we've seen a thousand times. To them, they'll call those an insert set and be done with it.
Just this past Tuesday, I had two separate insert cards roll up to my house. Neither were crazy Jordan/Kobe/Griffeys that costs hundred of bucks. But each was special to me and cards I had wanted for some time: 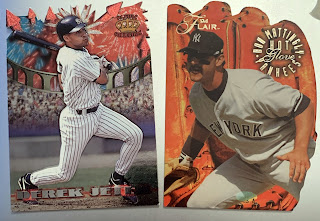 Look at those beauties. It's a coincidence that they are diecut, which is not a requirement for a great insert. But boy at they pretty.
Hot Gloves were those cards I saw on the pages of card magazines and as a kid and dreamed one day I could have. Packs of Flair at CVS were out of the question. $4.99 for a pack in a little box? Nope. Grab a pack of Score for $.89 and be on our way. 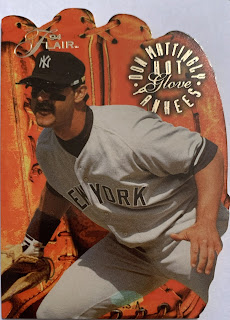 Pacific was wacky and zany and felt like a brand you settled on, yet over time the efforts have become much more appreciated. 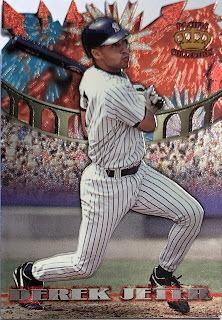 Was it the competition that drove this? Insane designers looking to give their brand an edge? Companies open to fun and not just "you get what you get" because we have no other choices?
It's sad what Topps has done to inserts in their focus on parallels, autographs, SPs, and RCs.
Long live the '90s, the undisputed greatest era of baseball cards.
Posted by The Lost Collector at 7:56 AM