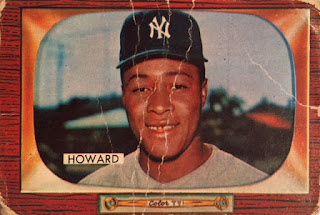 It's been a long time since I picked up a beat up vintage card that I otherwise wouldn't be able to afford. However, when this 1955 Bowman Elston Howard RC popped up for basically no money,  I decided it would be cool to add the rookie card of a key Yankee from the '50s and '60s.

Howard gets overshadowed by guys like Mantle and Maris and Berra, but he was a hell of a player. It's easy to forget he was the 1963 AL MVP. He was also the first African American player on the Yankees. He won four World Series rings as a player, and two more as a coach. His life was cut far too short, as he passed away at age 51 in 1980.

I was surprised to see that he never got more than 21% of the Hall of Fame vote. His stats now don't look great, but there's no doubt he was one of the better players on a remarkable team, and played a demanding position, playing it well. Perhaps that isn't enough to make it to Cooperstown, but it was plenty for a spot in Monument Park in the Bronx. Maybe that's enough.
Posted by The Lost Collector at 5:00 PM