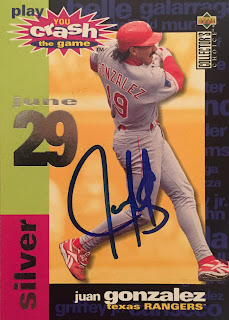 TTMs have been slow for me lately. I know it takes a few weeks for mail to forward to a new address from a previous one, so hopefully that is the reason for the delay. Otherwise, it hasn't been a very successful TTM summer for me.

Anyhow, again I've got a non-Yankee success to show off. I'm actually surprised this guy was never a Yankee, as I know George Steinbrenner lusted after him on several occasions.

However, I've always been a fan of Juan Gonzalez because I remember watching a game with my older brother, and Juan Gone becoming mythical to me because of that.

It was probably 1992 or 1993, and I was a bit gullible. My brother - seven years older than me - once told me Michael Jordan never missed a shot. Well, I watched a game and saw him miss one, so I went around telling everyone at school "I saw Michael Jordan miss a shot." Idiot me.

Another time, we were watching a baseball game. I'm not even sure if it was Yankees/Rangers or some other team vs the Rangers. Juan Gonzalez came to the plate, and I hadn't heard of him. My brother, not being as mean as in the MJ instance, said "You gotta watch this guy. He hits a HR every at bat." Sure enough, Gonzalez went deep that very at bat.

Obviously he didn't hit a longball every time up, but I'll always remember him because of that story. 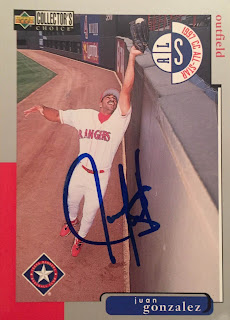 Mr. Gonzalez was nice enough to sign a few cards for me c/o his home in 24 days.
Posted by The Lost Collector at 8:26 AM