A Flair for the past


I can honestly say that I never purchased a pack of Fleer Flair cards growing up. It’s not that I wouldn’t have liked to. It’s just that they didn’t fit within this 12-year-old collector’s budget. They routinely ran $3.99-$4.99 per pack, and the cards came in a fancy little box – at least the earlier versions did. Beckett magazines were loaded with images of Hot Gloves and Wave of the Futures. I often swooned, but never pulled the trigger, instead staying with the traditional packs of Collector’s Choice and Score. Often, I rode my 12-speed Pacific bike to CVS with the loose change for a pack in my hand, counted precisely. Even if I had dropped one nickel on the mile ride, I wouldn’t have had enough for a pack.

So Fleer Flair sat there, years later entering my collection via eBay and trades and blogger packages. To me, it’s still special when a Flair card shows up, because that little voice in my head still tells me it’s a premium card. 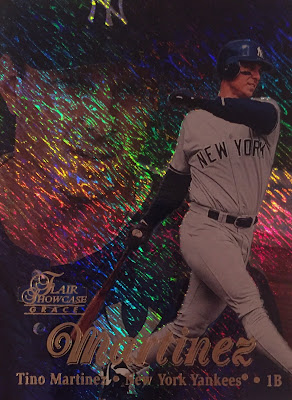 Later in the 1990s, Flair had some sort of weird parallel system with rows and seats and different names like Showcase and Showpiece and on and on. I don’t really get it, and probably won’t. What I do usually know is a Tino I don’t have when I see it. In this instance, it was the Grace Showpiece Row 1. According to www.baseballcardpedia.com, it would have been seeded 1:24. I think I looked at the matrix correctly.

Regardless, it’s a gorgeous card, and although confusing given the naming convention, it still feels as premium as ever.
Posted by The Lost Collector at 8:18 AM