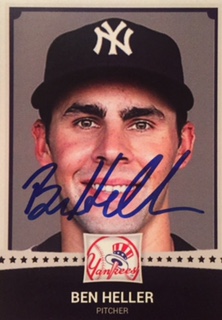 Woohoo, an actual success from sending a request to Yankee Stadium. That's my first this season!

Ben Heller signed my card in just nine days. I timed it well with the Yankees' recent homestand, knowing the team was going to be in town for a while when I sent it.

Heller came to the Yankees from the Indians in the Andrew Miller trade. He rode the Scranton Shuttle once before making his ML debut on August 26. Five days later, he picked up his first Major League win in an extra-inning game versus the Royals.

In all, he's made seven appearances on the season and is part of the Yankees 47-man bullpen right now. He'll be a prime candidate be part of the revolving door of relievers again next year, but hopefully will pitch well enough to stick in the Bigs and become a vital piece of the Yankees bullpen for the next few years.
Posted by The Lost Collector at 7:00 AM