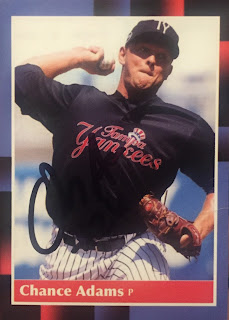 Chance Adams really burst onto the scene this year and established himself as one of the Yankees top pitching prospects. In 2015, he was a 5th round pick out of Dallas Baptist...hardly a guy you'd expect to get overly excited about. As we've seen the last few years, guys taken in the 5-10th rounds tend to be cost-saving picks to save draft pool money.

The Yanks did give Adams a healthy $330K bonus, right around slot. He was a reliever in college, so it looked like he would perhaps be a quick moving bullpen arm.

But the Yanks had other plans.

They decided to try Adams as a starter this past season after working out of the bullpen in 2014. The results?

It appears the Yankees knew what they were doing. Props to the scout who found him at Dallas Baptist.

Unfortunately, the Yankees shut him down before the AA post-season due to innings limit, especially being a previous reliever. I'll be very curious to see if he returns to AA for a few starts in 2017, or if he'll be ticketed for AAA and ready to spot start in the Bigs if needed. He's just 22, so there's really no rush. However, with the Yankees and their dire starting pitching needs for 2017, I have a feeling we'll be seeing him in NY at some point.

Adams was nice enough to sign this Rookie App custom for me in just eight days.. As Zippy Zappy pointed out, bad call using a dark image. Oh well. The autograph is still on there, and I'm happy to have it before this guys blows up.

Posted by The Lost Collector at 8:27 AM