Hopefully now that the minor league season is mostly over, a few TTMs from the season come in.

I sent this request to Yankees prospect Nick Solak toward the end of the season. Since I'm geographically close to Staten Island, I felt the gamble wasn't too high that it'd get to him before his season ended. Luckily, it came back really quickly signed perfectly. 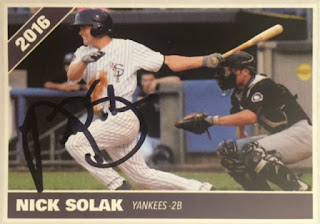 Shout out to the Rookies App for the custom card.

Solak was picked by the Yankees in the second round of the 2016 MLB Draft. He played his college ball in Louisville, and carried his college success straight into the minors. He spent all year at Staten Island, hitting .321/.412/.421 in 240 ABs. That'll do. As a 21-year-old from a big-time program, he'll be ticketed for full-season ball next year.

From what I can tell by his Tweets, Zippy Zappy enjoyed watching him play this season. I didn't get the chance to see him in person, but I look forward to Solak climbing the ranks over the next couple of years.

Thanks for the autograph, Mr. Solak.
Posted by The Lost Collector at 7:00 AM