Let there be Justus 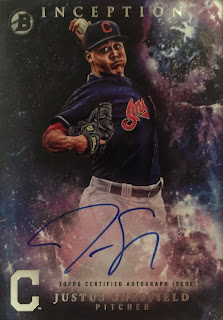 I’m not usually one for grabbing autographs of players featured in another team’s uniform, but with the influx of prospects into the Yankees system as the result of their trade deadline deals, I’ve softened my stance a little. I want to add a few signatures of these guys now, as I’m not sure when we’ll see them on Yankees cards.

The first auto from the July crop I’ve been fortunate enough to add is that of Justus Sheffield. Some have sad that he is Gary’s nephew, although that looks to a myth. So far, the lefty has been phenomenal with the Yankees, going 3-1 with a 1.73 ERA and 27 Ks in 26 innings. He was just bumped up from high-A Tampa to AA Trenton, where I assume he’ll begin next season. MLB.com has him as the Yankees top pitching prospect, which is certainly true while James Kaprielian is on the shelf with an injury.

Hopefully I can add autographs of Clint Frazier, Gleyber Torres, and Dillon Tate in the near future, but this will hold me over for now.
Posted by The Lost Collector at 8:00 AM