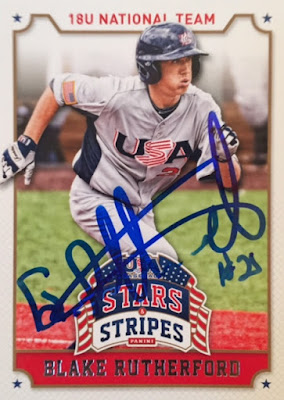 I feel very lucky on this one.

When Yankees 2016 1st Rounder Blake Rutherford debuted with the GCL Yankees shortly after signing, I quickly sent out a TTM request. But then something he happened. He was promoted after just 8 games. Damn you and your advanced approach, Blake. Knowing that probably meant my TTM request was a lost cause, I quickly sent out another request to him in Pulaski, where he was bumped up. I will say that I was fortunate to have two of the exact same card, as P-Town Tom sent them to me – one for TTM, one for me. Then I used both for TTM. Oops. I can’t be trusted, Tom.

Luckily, the one from Pulaski made it back! I denoted on the PWE with a little P to know it was the Pulaski version I sent. Either way, I was ecstatic to get this, as Rutherford autos are a bit pricey since we was expected to be a top-5 pick, then was snatched by the Yankees a little after that. That, my friends, makes prices go up. I figure once he appears in Bowman Draft some of the USA Baseball stuff will go down, but still, I didn’t want to wait for that.

Rutherford had a fantastic start to his career, hitting .351/.415/.570 in 33 games between the CGL Yankees and Pulaski. Just the kind of start you’d hope to see from a highly touted pick. I can’t wait to see him next year, as he’s got all the tools to be a high end prospect, and if it weren’t for the July trades and influx of prospects, would likely be in the running for Yankees top prospect already. Next September, he certainly may own that distinction.
Posted by The Lost Collector at 7:00 AM