I won't lie. I'm sick of the social media joke "Gleyber Torres is 22." Actually, he turned 23 since since last season ended. The joke, like anything on social media, got overdone. Especially when you consider guys like Soto and Acuna have just as bright futures and are younger.

Don't get me wrong, I love Gleyber and hope he's a Yankee for a really long time. A 22-year-old middle infielder who hit 38 homers is pretty awesome, especially when he was projected to maybe hit 20 a year during his prime.

With that, I recently received this 2020 Decade's Next insert from 2020 Topps via a TCDB deal with PhillPhan. I sent him four Phillies cards from 2019/2020 for this one insert card. 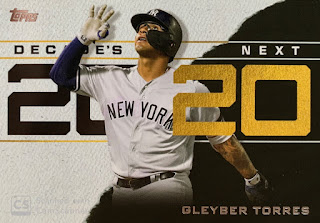 I think it's one of the better looking inserts I've seen this year. I still think Topps' inserts are boringly flat, as they refuses to add any interesting textures to the cards. That would = time and money. This would look great with some shine or gold foil or some different texture between the white and black sections of the card. Think mid-90s Ultra.

The back is pretty basic too, but does mention that Gleyber will be 32(!) at the end of the decade. I hope he continues to be productive then, and hope he's still a Yankee at that point. Topps even lists out where he could potentially be at that age stats-wise, such as at 350 homers. 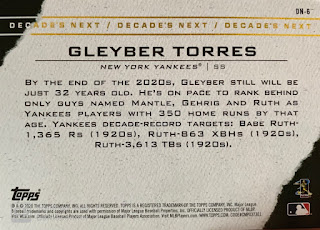 Who knows what could happen between now and then, but overall, one of Topps' better 2020 inserts thus far.
Posted by The Lost Collector at 9:27 AM