Panini could be winning

Over the past few years, I've been really unimpressed with Topps. There have been some exceptions, but as a whole, I feel their designs and card products are pretty lackluster. I know they receive a lot of flack and hating on them is the cool thing to do.

Some of it is warranted. Some is not.

But I just don't think they care about the aesthetics of most of their cards.

As a child of the 90s, I like flashy cards. I like inserts that feel special. Ones that feel rare and nit because they are low-numbered.

Instead, we get things like 150 Years of Baseball that are fairly bland and lack much design thought, and the company just wants to stuff as many subjects into the set as possible.

I miss the 10-card RBI Kings or Wave of the Futures. I miss looking forward to the card that is not like the others in each pack, as opposed to having to squint at the backs of cards looking for microscopic codes to see if I pulled a special card.

Not everyone agrees, and thats fine. One era of collectors prefers a big base set and that's it. Some prefer all the parallels and latest prospects. I prefer a time when inserts were shiny, thoughtful, whacky, and even a bit asymmetrical.

Lately, I've been gravitating towards some of Panini's cards. The logo-less photos are hard to get around. I still don't love it. But their designs can be really interesting. I'm not talking about the weird 2020 emoji cards. I'm talking about Lumberjacks. Like this: 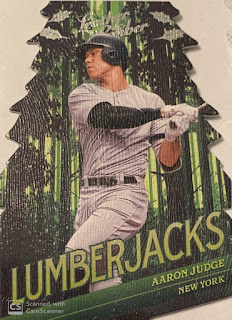 I mentioned on Twitter it looks like a car air freshener. This card could be dangling from the mirror of a cab. It's so cool. And it's even textured. That's what I like. This is something Pacific would have done. They made card ornaments, after all.

Another card that caught my eye was this Prizm. It's an Illumination. That doesn't mean anything to me. I'm not smart enough to know which Panini set is which, but when something like this catches my eye, I try to make it mine. The colorful jewels looks awesome. 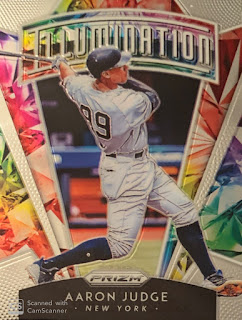 I'm not a Panini stan. Not at all. A lot of what they do is awful. And the logo situation is crap. And I rarely see them in stores. And when I do the packs have four cards in them.

But their cards look better than Topps' do right now, and it's not particularly close.

Posted by The Lost Collector at 8:42 PM