My first Tino Martinez card of 2020 rolled in yesterday. It's an autograph from 2020 Topps Series One, from the Baseball Stars insert set. It's sticker autograph (which means there are more stickers out there), and it's numbered just 15/25. 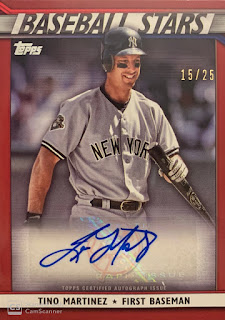 I'm trying to figure out what's going on in the photo, and have two theories.

1. Tino just struck out, and is walking back the dugout. It looks like a perhaps annoyed smile, or even clenching his jaw in frustration.

2. Or, he's on his way back to the dugout after a teammate brought him in, and he grabbed his bat. I'm pretty sure when zooming in that it is NOT Tino's bat. He rarely used a black bat. I can't quite make out whose bat it is, but when I zoom in, I don't think it is his name. 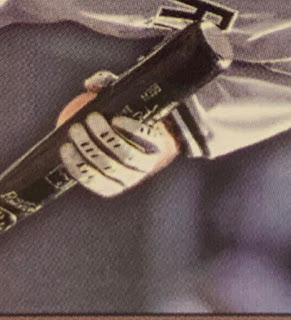 What do you think? Any other theories?
Posted by The Lost Collector at 8:00 AM