Tino Martinez is the subject of two different autographs in 2021. The first is a sticker autograph on the 70 Years of Baseball set. While I plan to pick it up at some point, I haven't yet.
The second is the one I've been focused on, which is the 35th Anniversary set, which features the 1986 Topps design and an on-card autograph.
I haven't managed to snag the unnumbered card yet, but I did pick up the red parallel version, which is actually pretty cool looking. It's numbered to 25. 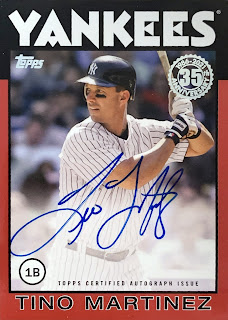 While we all know that the red is supposed to be white, I like this spin on an old design. In fact, I'd love if Topps did this to their reprints more. Because we know they are going to run out reprints and former designs every single year.  And I like when they Chrome or Refractor old designs. The '52 Redux cards are boring, but the Chrome Refractory ones are not.
In fact, I think they should consider color swaps quite a bit more. The red looks good, and so does the gold, from what I've seen.
I hope this is a trend that continues. Next year, we'll get 1987 Topps as the 35th design. I think we've all had enough of that. But the parallels have potential if they'd switch up the colors of the borders. And all white border, or a black border, on a 1987 could look very interesting.
I don't mind reimagining some of these past designs. They've lost a bit of how sacred they are by Topps shoving them down our throats in multiple products per year. If you're going to repurpose, give us something new. Do some color or texture swaps.
Tino on an '86 looks cool. But Tino on an '86 with red looks even cooler.
Posted by The Lost Collector at 7:48 AM