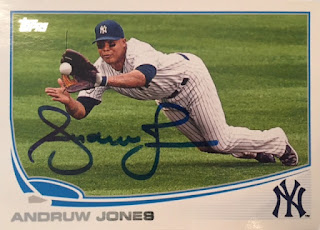 I tell you, this is one of those TTM successes I get really geeked out about. Yeah, it's nice receiving a a prospect who is in Double A, but a guy with 434 career HRs? That's on another level.

He'll always be known as a Brave, notably for his 2 HR performance as a 19-year-old in Game 1 of the 1996 World Series. I can have a greater appreciation for that since the Yanks won the Series, otherwise I'd be bitter.

He was an elite power hitter during his prime, including hitting 51 homers in 2005. He was also a fantastic outfielder, winning 10 straight Gold Gloves. After he left the Braves, he bounced around to the Dodgers, Rangers, White Sox, and finally the Yanks for two seasons. I enjoyed watching him, especially in 2011 where he pretty much crushed lefties all season long.

It'll be interesting to see how he fares on the 2017 HOF ballot. I think he probably falls short, but he was certainly great for a long time in Atlanta.

Mr. Jones signed this card for me in 30 days,a nd has a really nice looking autograph. Thank you, Andruw!
Posted by The Lost Collector at 1:45 PM