On Saturday, I received a cool TTM success from Hard Hittin' Mark Whiten. Turn around time was just 7 days. 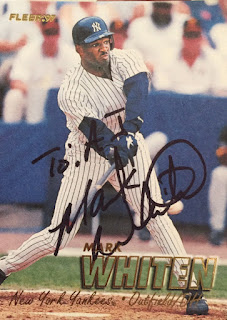 Whiten had some of the best power in the game, hitting 4 HRs in a game In a 1993 game, he hit 4 HRs and had 12 RBIs. I remember being very excited when the Yankees got him in 1997, immediately calling my friend and saying "guess who the Yankees got? He was on the Mariners last year." He responded with "um, Buhner?" Me: "Oh. Damn. No. Mark Whiten."

White played 69 games for the 1997 Yankees, which I have to admit, I don't remember at all.

Regardless, this is a very cool success on an awesome set. Thanks, Mr. Whiten!
Posted by The Lost Collector at 7:00 AM