I haven't done one of these in a while, but I've still got tons of these to show off. To recap, an AWESOME Listia seller sent me a bunch of autographs a while back (probably over a year ago now) with a few of my card purchases. He even sent me a bubble mailer full of autos randomly, without having made a purchase.

So I've been grabbing 5 or 6 at a time and showing them off, as they are pretty great and it's nice to share some non-Yankee autographs here and there. Previous installments: 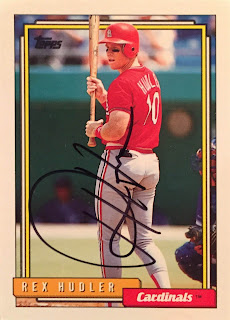 Let's kick it off with a Rex Hudler autograph. Hudler, aka Wonderdog, was actually a first round pick of the Yankees in 1978 and made his Big League debut with them in 1984. He played a couple of years for them and then was traded to Baltimore for Gary Roenicke. He bounced around quite a bit as a player because he was versatile, playing every position but pitcher and catcher in his 13-year career. His best season came in 1996 at the age of 35, as he hit .311 with 16 HRs and 40 RBIs for California. He has spent considerable time in TV, and also does motivational speaking. Most impressively, to me, is his work for Team Up For Down Syndrome. 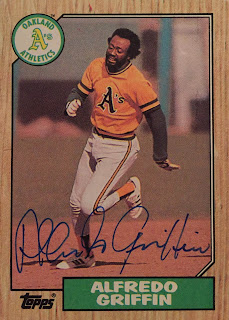 This is one of the sweetest cards from 1987 Topps. I always loved that green on the '87 set. Man, it looks like Alfredo Griffin in pain. His signature on this card is pure magic. Griffin, the 1979 co-AL Rookie of the Year for Toronto, played for four teams in 18 seasons. Not bad. He owns three World Series rings - one with the Dodgers in '88, and two with Toronto in '92 and '93. He made his lone All-Star team in 1984, where he was actually the plus-one of Damaso Garcia, and stepped into duty when Alan Trammel got hurt. Hilarious. He hit .241/.248/.298 that year, but hey, right place right time. He was a very good defender at shortstop, picking up a Gold Glove in 1985. Other fun facts: he was on three different teams that were not only no-hit, but perfect gamed. Cool enough, he was on deck when Joe Carter hit his famous World Series winning HR. That was his last game. Talk about an interesting career! 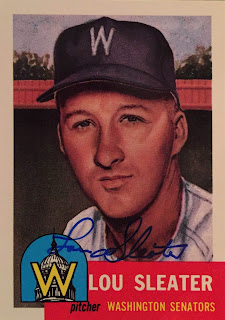 So this is not an actual '53, but it is a Topps Archive signed by Lou Sleater. I have to admit, I had never heard of Sleater before this. I was amused to find out he had been acquired by the Yankees twice in his career, but never did pitch for them. He bounced around organizations like a ping pong ball, but did manage a 7-year Big League career, mostly with the Browns. He won 66 minor league games, while only winning 12 Major League games. Still, he played pro baseball for 13 years. No knock there! 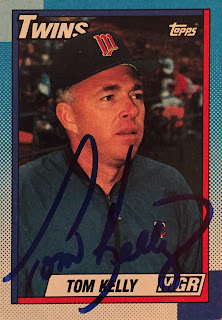 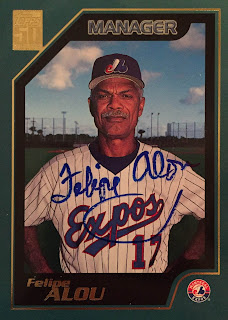 Another cool ass manager! Felipe Alou, of one of the greatest baseball families in the history of the game. Why the hell aren't there any Alous in the Majors right now? This is crap. He managed the Expos for 10 seasons and was at the helm for that really good team in 1994 that would have lost to the Yankees in the World Series. He also managed the Giants from 2003-2006, winning his lone post-season game in 2003. As a player, he was a three time All-Star in 17 seasons, ending his career with a .286 batting average and over 2100 hits. That's a very solid career.


Posted by The Lost Collector at 9:00 PM