This was a big TTM success. Everything about Domingo Acevedos is big. He's 6'7". He has a big fastball that routing approached 100 MPH. And he is one of the Yankees best starting pitching prospects. I also like the mean face he makes when he pitches: 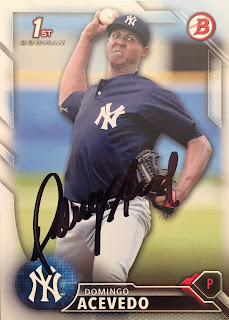 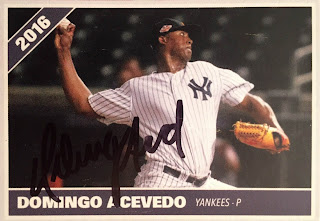 Outside of James Kaprielian, Acevedo likely the best pitching prospect in the organization, although you could flip flop him and Ian Clarkin without much argument. The biggest thing the big righty needs is innings. He did spend about a month this season on the DL, but he's back. When he's pitching, he's very good. He just needs to stay on the field. On the season, he's 2-1 with a 2.19 ERA in 37 innings, striking out 43 while walking just 5 for Low-A Charleston. That's impressive control for someone that big. He's also kept the ball in the ballpark so far, allowing just 3 HRs in over 140 pro innings.

I'd love to see him have a strong, healthy summer, and perhaps make a cameo in High-A Tampa later this summer. He's got the talent, now he just needs the reps.

Of course, I did just pick up his certified Bowman auto, so naturally this would arrive shortly thereafter. Regardless, that's a good problem to have with a prospect like Acevedo.

Posted by The Lost Collector at 10:53 AM