While I was born in the early '80s, I grew up in the '90s. Baseball players resembled comic book superheroes. Obviously many were aided by needles and pills and clear creams, but when I think of baseball players, I think of hulking dudes in their late 20s.

Even today, these guys - for the most part - are in tip top shape. Mike Trout looks like a machine. Judge and Stanton? Huge. Whether they use supplements or are more diligent about off-season training and weight-lifting, these guys continue to resemble the players I knew in the late '90s.

One of my favorite things to do when looking at cards from the '80s and earlier is to think, "that guy played professional baseball?! He doesn't even look like he could catch a fly ball." It's judgmental, as I'm very much judging a book...or a card...by it's cover. Case in point? 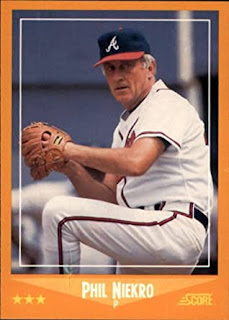 I always laughed at Gene Harris on Major League because he didn't look like a real major leaguer the way Pedro Cerrano did. But you know what? He wasn't that far off. Just look at Phil!

You go back even further in the 80s and 70s, and these guys looked so unathletic - just based on a picture of a piece of cardboard - that I find it funny.

Before you get bent out of shape, yes, I know many of them were great players and it was a different time. It's just funny that guys who looked like my nextdoor neighbor could be MLers.

Happy April Fool's, everyone. Stay safe.
Posted by The Lost Collector at 7:00 AM