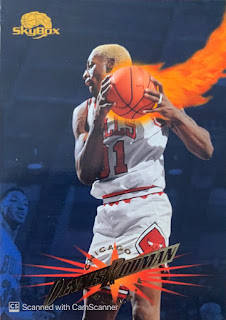 One of the highlights for me in episodes 3 & 4 of The Last Dance on ESPN was the focus on Dennis "The Worm" Rodman. I can't think of too many more fitting nicknames for a player like him.

I really liked watching him play growing up. I didn't look at him as a role model. I knew he wasn't someone to look up to as a heroic figure. But I loved how he played. His job was to be pull down rebounds and be a defensive pest. And he performed both admirably. Who knows if we'll see another player like him ever again?

One thing that gets lost in his zaniness was how intelligent of a player he was. It's easy to chalk him up to being a weirdo, but he was very bright on the court. You don't lead the league in rebounds per game 7(!) straight years by not having a high basketball IQ. Especially at 6'8". He knew how to position himself, and his body, to put him in the best spot possible to pull down a board. From knowing angles to tipping the ball to keep it alive, he was a beast on the glass. It was interesting hearing him talking about the spin on a player's shot, and how that helped to position him for the rebound.

His antics and famous hair also lead to some great cards. When you think of 1995-96 Fleer (and 1995 Fleer baseball), does any player fit better on these cards than Rodman? This set design was made for him. 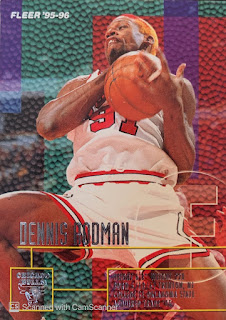 My favorite card of him is probably this EX-2000 with the transparent background. Look at The Work pulling down that board with two hands. 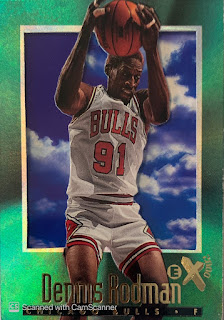 I've mentioned my love of the Bulls black jerseys, and Rodman always wore them well. They made his hair stand out even more. 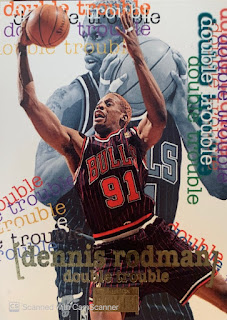 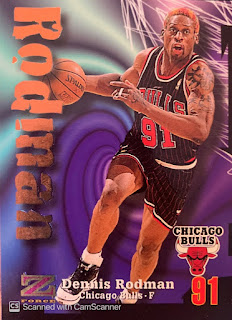 I used to love when he'd do something good and run down the court with his fist up. 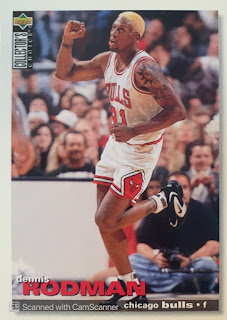 Some of his non-Bulls cards are classics as well. 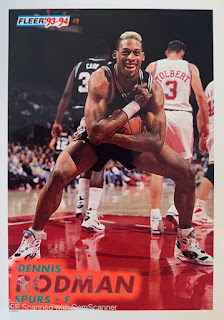 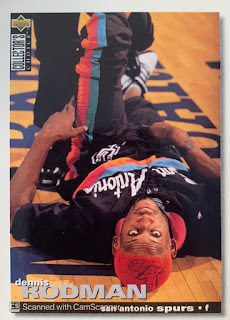 He was a hell of a player, and the Bulls don't 3-peat for a second time without him.
Posted by The Lost Collector at 8:31 AM