Has it really been 5 years?

Recently, I placed a SportLots order. Not a big deal. A lot of people do.
What was significant for me is that when I was looking at my account, it was the first order that I had placed on the site in five years! I had not ordered anything there since 2016. That's a pretty long time ago.
I really don't know why. It's a site I enjoy and have had only good experiences. But for whatever reason it just hasn't surfaced to the top for me in the last few years.
There wasn't a single instance that caused me to return or think "hey, I should go place an order." More than anything, it's rare when I come across a Tino I need on eBay. Even if it's low-end, it usually runs me $3-5 after shipping. And I'd pay it without blinking because it was a card that wasn't in my collection.
Then recently I was on TCDB looking at my Tino 'wants', which are essentially all cards of his I don't have. I realized a lot of them were readily available on SportLots, so I went looking and put about 22 or so in my cart. After a few days, I checked out, and the envelopes started pouring in.
I usually try to find a seller who has three or four cards and offers budget shipping. I try not to jump into the padded envelope territory unless I can get a bunch, or that they are a bit rarer.
Here's a sampling of what came in. Lots of shine. 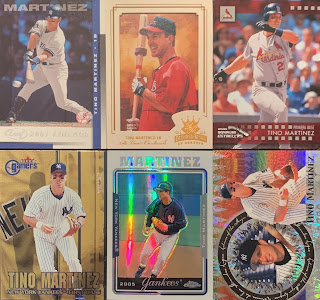 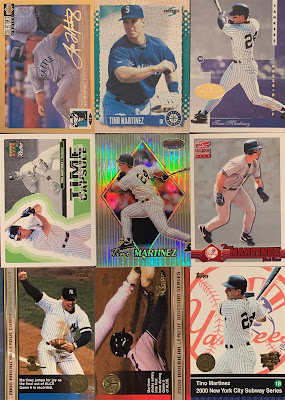 Very solid order, and I plan on making the site a more regular part of my card shopping.
Especially as I get closer to 1,100 Tinos...which I happen to be 15 away from now.
Posted by The Lost Collector at 7:00 AM