How do you eat your nachos?

I like my nachos to have some liquid gold in the form of nacho cheese. Lots of it. In fact, last Monday we took the kids to Disney on Ice, and I definitely downed some nachos. I don't like to go crazy with toppings. I just got nachos with one compartment of salsa, and the other compartment of the aforementioned liquid gold.

I also love to put a nacho chip in the hot liquid cheese and let it sit there for a few minutes, then take it out when it's a bit mushy and cheesy. It's the simple pleasures.

I prefer some jalapeños on there as well, but just a few. And in a setting where I have more control of the situation, I like some buffalo chicken or ground beef and chili on there. No sour cream. Ever. No guac. Ever.

So I'm pretty simple when it comes to my nachos.

Speaking of gold and nachos, Chris over at Nachos Grande has been breaking a product near and dear to my heart - 1996 Collector's Choice. I grew up on Collector's Choice, so I've been enjoying each post as he takes us pack-by-pack through his box.

I was surprised when he pulled a usually-one-per-box gold signature of this guy: 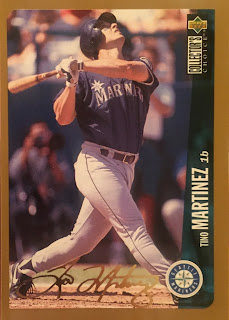 Yeah, Tino! Before he was a Yankee, but still, Tino! Popping out in a spring training game! I quickly checked my Tino list and sure enough, this card was not on there. I needed it!

I left a comment, and Chris was kind enough to send the card my way in a PWE packed with a few other Yankees. Not a bad way to get Tino #779!

Thanks, Chris! Enjoy the rest of the box.
Posted by The Lost Collector at 5:00 PM