Anxiety over the Topps Yankees Project 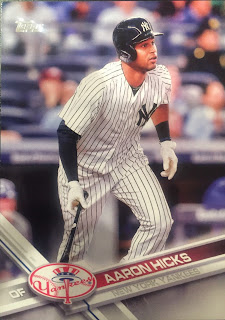 I won’t lie. On the eve of pitchers and catchers reporting to Spring Training, I’m nervous about the 2017 edition of my Topps Yankees Project.

For those that don’t know, I’ve collected a TTM autograph of a Yankee on every Topps issue from 1951 to 2016. There are no repeat players, and everything was done via the mail. I completed it a couple of years ago, and now my only focus is adding the next season. In this case, 2017. Here's a link to view, although I don't believe I've done a full rundown since 2015.

I'm anxious because the Yankees checklist in 2017 isn’t on my side, at least for Series One. Usually there is a reliever or role player I can count on, such as JR Murphy or Austin Romine or Boone Logan. This year, I’m not sure how this is going to work out. Here’s the checklist, with each player’s signing habits:

So there you have it. Not encouraging. Eovaldi is going to be my best chance, assuming he signs with a team soon. I think I’ll send to each player, knowing that I won’t be getting them back. I always end up with a decent amount of Series One from trades, so I’m not too worried about losing the cards. Still, you never know! It’s worth a shot. Otherwise, I have to wait until Series 2, or <grasp> Update.
Posted by The Lost Collector at 5:00 PM