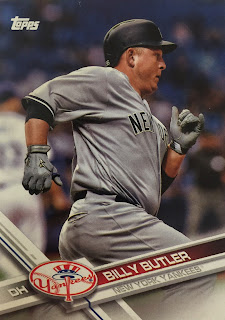 Butler signed with the Yankees in mid-September and had 32 plate appearances in 12 games. He is a free agent and (as of writing this) remains unsigned.

I'm not positive why his name would have come up as a player to be included as a 2017 Yankee. I know that Series One tends to be a "look back" at the the prior year, but this still doesn't make much sense. The only real reason I can think of is that he joined the Yankees too late to get a card in Update, and Topps wanted to give him one in 2017. Maybe a stretch, but that's the best I can do.

There are a few others I would have rather seen as a Yankee if we are going to select someone random, such as Ronald Torreyes or Tommy Layne, both guys who spent far more time with the Big League club than Butler.

I also can't help but notice there was no Alex Rodriguez or Mark Teixeira farewell cards. Both guys made their retirement announcements long before Butler was a Yankee. Will they be saved for Series Two? Will they get one at all? There's over 1,000 homers between the two of them. I know Rodriguez is controversial, but it's surprising Teixeira wouldn't be given a final card. Considering that Nathan Eovaldi got a card after missing the final two months with TJ surgery going into a free agent off-season, it's a little odd not to see a guy like Teixeira in there.

Honestly, there are a lot of head-scratchers with this checklist, and Butler is right up there. I'm sure the checklist has to be finalized by a certain date, but it's still a bit odd to try and piece together. I'd assume this will be Butler's only appearance as a Yankee on cardboard, but who am I kidding? Heritage is out in three weeks, so we shall see soon enough.
Posted by The Lost Collector at 5:00 PM