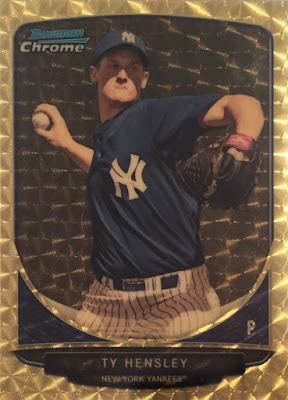 I finally have a Superfractor.

And the best part is? It’s of Ty Hensley, a player I avidly collect.

It’s the most I’ve ever spent on a card – by far. And at a time when I’ve been saving up my card funds for a Jeter autograph, it certainly could have come at a better time. However, I didn’t think I’d ever see this card, and had to make it happen. 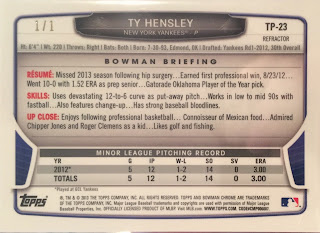 The card was first listed on eBay with a starting bid of $125. I messaged the seller with an offer for substantially less than that, to which he/she declined. You know, Yankees first round pick. This was going to fetch big bucks, the seller must’ve been thinking.

After a week, it did not sell, and was dropped down to a starting bid of $100. Still nothing. I messaged the seller my offer again, this time without a response. The card went unsold again after a week.

The next week, it was listed with that same $100 price tag, but this time, the words I’ve been looking for were included…”Or best offer.” I sent a lower offer than my original, and the seller responded with a counter just below the asking price. I then sent my final offer, which was the same as my original offer from three weeks prior, and waited…and waited…and waited. Finally, while sitting in a Dunkin Donuts while my car was getting serviced, I got a notification on my phone.

“The seller has accepted your offer.”

I had the PayPal funds to back it up, and quickly made my payment. A few days later, I had it in hand. 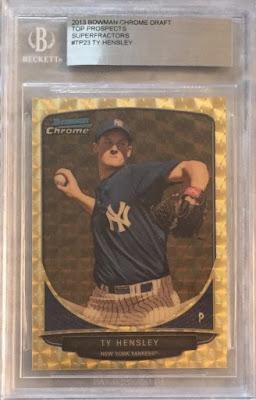 The card itself is ungraded, but slabbed in a Beckett case. I asked Beckett about this on Twitter, and they said that collectors have the option of just slabbing for protection/display without going through the grading process. I haven’t decided what I’ll do – if I’ll break it free or re-submit it for grading or what. For now, I’ll leave it alone.

I’m just happy to have it. And now my rainbow is truly complete.
Posted by The Lost Collector at 6:00 PM