As I mentioned on Twitter, my wife was on her way to Target today and texted me "Heading to Target. Need anything?" Of course you know right where my head went. So I texted her a picture of 2017 Topps and said "These came out today. If they are there, please grab a box. If not, I'll check this weekend."

I fully expected her to grab a box of 2016 Topps Series 2, but she texted me a picture, and lo and behold, a blaster! So she grabbed it for me.

That was at about 10am. Then I had to work all day knowing this box was waiting for me. NOT EASY! I'm spoiled - Superfractor yesterday (posting coming!) and now a Series 1 blaster today.

Since I already ordered a team set, and have zero luck with the retail, I fully expect this to be the only box I open outside of a stray pack here and there. So why not do a "live" box break...or at least update my packs in real time.

I could probably do some sort of Facebook or Twitter Live or something, but I don't want to do that. So I'm just going to update this post after each pack. Here we go!

First card of the year: 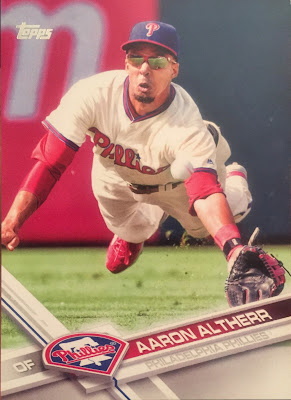 Who the hell is this? I'm not joking, I have never heard of this player.

And here's the rest of Pack 1: 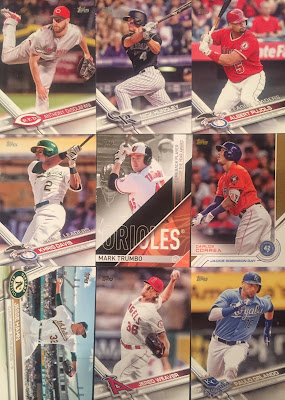 Initial thoughts: Eh, whatever on the base. I was in the minority of those who didn't mind last year, and I don't mind again this year. I've got enough going on in my life than to get worked up over what a card looks like. They are fine. Not my favorite, not my least favorite. There will be another design most probably won't like next year. And in 2019. And in 2020 all the cards will be digital, so enjoy these while you can.

I do miss full stats on the backs of the cards. I think that should be a staple for flagship. I don't mind it as much on other releases. Again, not up in arms, but my preference would have been full stats. Just as easily as it is go find full stats online, it's just as easy to find a player's Instagram handle.

I might do a few packs at a time after this, but will still update this post. 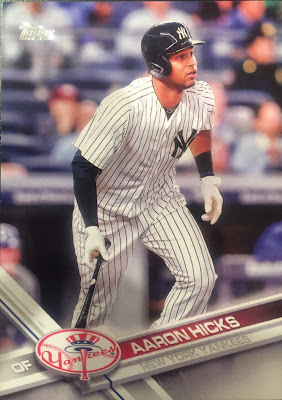 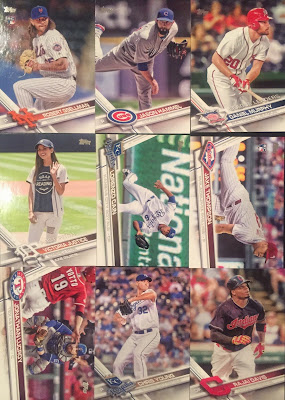 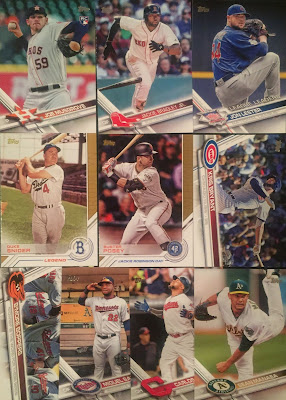 A couple of inserts. Topps Salutes and Jackie Robinson Day, although both look exactly the same. Pretty lackluster and forgettable, right? Cool to get both Bryant and Sano, as they seem to be the better looking cards of Series One. 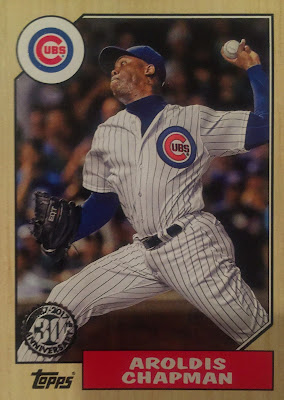 Rest of pack was pretty standard. 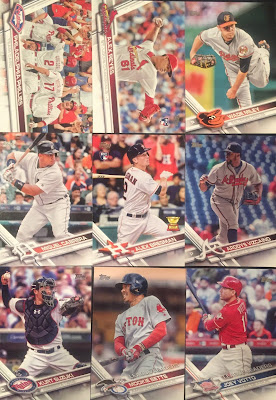 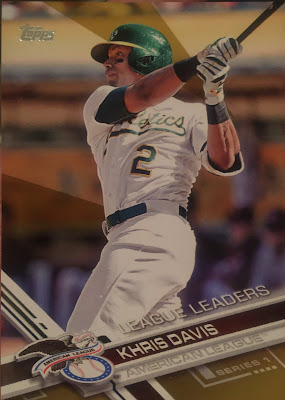 Another Jackie Robinson Day Topps Salutes, and an Award Winners card of Rick Porcello. No thanks! The Seager is pretty cool. 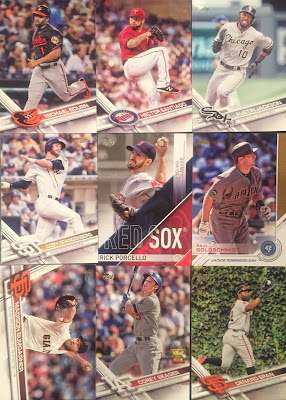 I like these 5 Tool inserts! They look pretty cool. The design is nice. 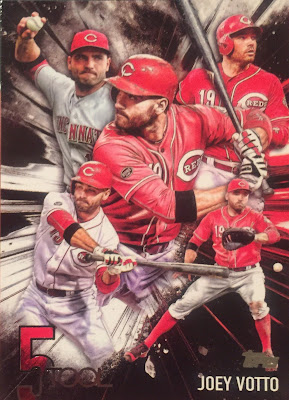 Oh my goodness I could not want that Kevin Millar MLB Network card any less. Literally I may throw it away. The Reggie is some sort of promo that just has info on the back. I don't think it counts as a card since this pack would have had 11 cards. 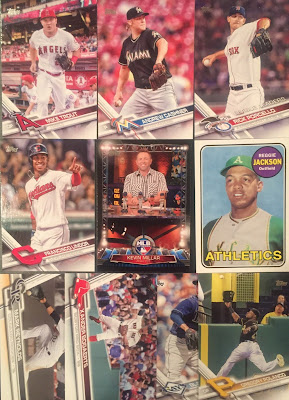 That Polanco is a great photo!


Two more of the Salutes/Jackie Robinson Day cards. At least you can see Longoria is wearing #42, so that's cool. 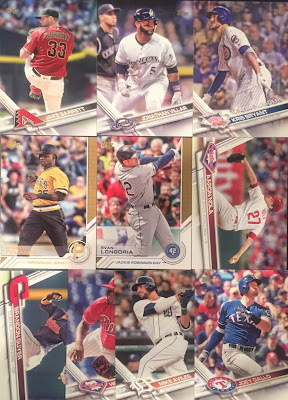 Two inserts! The Felix is one of those Then and Now inserts, and the Strasburg is another '87 Topps. Cool Pillar shot as well. Also, I follow baseball pretty heavily, but there are players in this set I have never heard of. 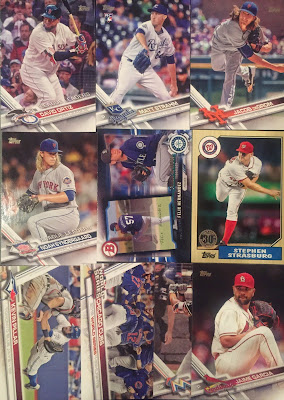 Alright! Two Yankees, including GARY SANCHEZ! The Clippard is helpful too since he's one of my only shots at completing the Topps Yankees Project in Series 1. 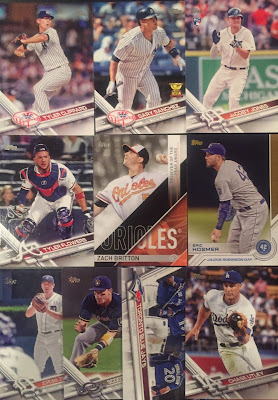 
Cool, one of the Rainbow parallels. They look fine, like in previous years. 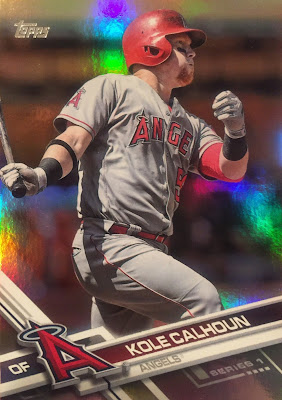 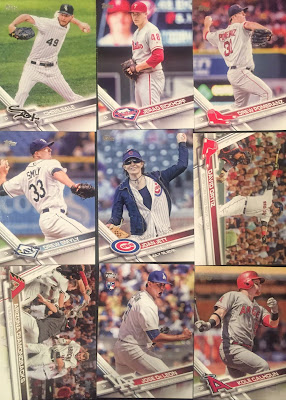 
Nope. These look ok in person, I suppose.  The coin is nice, but I don't think I'd want to own a bunch of them. I would have liked the Aaron Judge, that's for sure. 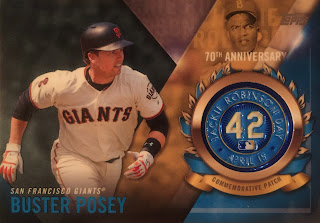 Ok, so that's it. A great reminder of why I don't buy retail. But I'm very grateful my wife snagged this for me, even if she has as bad of luck as I do with picking out blasters. It was still fun to open, and I look forward to sending out some TTM requests to the Yankees and trying to add 2017 to my Topps Yankees Project!

Posted by The Lost Collector at 8:27 PM

Email ThisBlogThis!Share to TwitterShare to FacebookShare to Pinterest
Labels: Topps