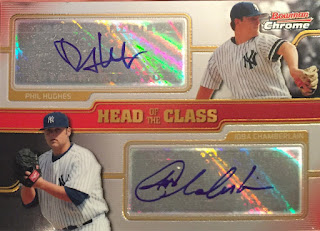 It’s hard to believe it’s been nine years since Phil Hughes, Joba Chamberlain, and Ian Kennedy burst onto the scene for the Yankees. Those three had massive potential, and some was reached with the Yankees and some wasn’t. But it’s easy to forget just how exciting it was when these three were waiting in the wings.

We had heard about Phil Hughes for awhile, and he made his much anticipated debut on April 26, 2007. I was at the game. I was in my first job in NYC still, and when it was announced he was starting, I quickly grabbed tickets online and headed up to the game with a buddy. It was easy to do that in my young, single days. It takes a lot more planning now.

While his debut was a little rocky (4.1 innings, 4 ERs, 5K), his next start was the defining one. He had a no-no going vs Texas, but pulled his hamstring in the 7th and was out until August. Who knows what could have happened had he not been injured that game. As for his time in NY, he did have some great moments, including a dominant 2009 in the bullpen as part of the World Series winning team, and then was in All-Star in 2010 while winning 18 games. He’s been a very serviceable pitcher in the big leagues, both with the Yankees and Twins, but he never quite lived up to his ace-in-the-wings billing. He left NY following the 2013 season.

Next came Joba. He flew through the Yankees minor league system in his first full season, and impressed enough that he was moved to the bullpen to help the big league club. That he did, making 19 utterly dominant appearances. This started a massive debate of whether he was a starter or reliever, jerking him back and forth between the rotation and the pen. It was stupid. I was always in favor of him being a starter, as he had four plus pitches that were sort of wasting away in the ‘pen. Most relievers are failed starters, and he never got a fair shot. He had a few ok years in the pen, and parted ways with NY after 7 seasons, same as Hughes.

Ian Kennedy was the last to make his debut in 2007, and he made three very good starts in September, enough to make the Yanks think he was a major part of their future in 2008. Things didn’t go as planned, as he had a shoulder injury in 2008 and then an aneurysm in 2009. Tough breaks. He was then shipped to Arizona as part of the Granderson-Scherzer-Austin Jackson-Edwin Jackson deal. He enjoyed success with the D-Backs, winning 21 games in 2011. He then went to San Diego, and finally signed with the Royals this off-season and is off to a good start.

When I fall in love with prospects, I always think back to these three. While it’s fun to hold onto your guys, in the vast majority of cases, they don’t live up to the hype. That doesn’t mean that are unsuccessful. I’d argue that all three of these guys have had very good careers. It just means that rarely do they live up to the HOF expectations placed on them while they are barely of legal age.

Regardless, a Joba Chamberlain autograph has always eluded me, and I found this cool one with Hughes for a great price. Ahh, what could have been!
Posted by The Lost Collector at 10:10 AM