Welcome to the show, Ben Gamel

Today I was thrilled to hear that outfielder Ben Gamel has been called up by the Yankees. With A-Rod landing on the DL, the Yanks were carrying an extra bullpen arm, but decided to bring up a bat today. I hope he gets to play - he couldn't be much worse than anyone else at this point.

For a while, Gamel was a prospect who didn't appear to be on the road to the Majors, but then he decided to hit .300/.358/.472 in Triple A last year to put himself back on the prospect map. He also had this sweet game-winning, inside-the-park HR:
If his name sounds familiar, his brother Mat played for the Brewers for five years.

Way back in 2011 I got this TTM success from him. The sharpie looks awful in the scan. It definitely did bleed a little, but doesn't look this bad in person. I never upgraded my auto. Maybe I'll regret it when he becomes a big star! 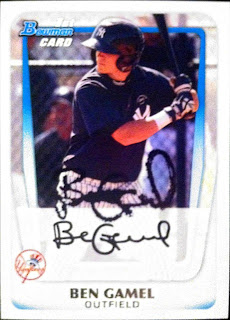 Best of luck to Ben!
Posted by The Lost Collector at 4:01 PM